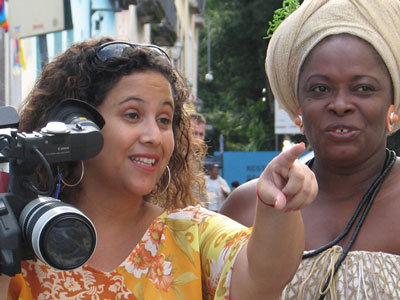 Carolina Moraes-Liu is an award-winning producer who has worked on documentaries and television shows for over 10 years. Her most recent film, Ebony Goddess: Queen of Ilê Aiyê, won the Corazon Award for best short documentary at the San Diego Latino film festival and the Best Diaspora Film award at the San Diego Black Film Festival. Carolina also produced and directed the documentary film Festive Land: Carnaval in Bahia, winner of the Remi Award at the WorldFest International Film Festival, and part of the curriculum of Latin American Studies and Cultural Anthropology classes in many universities, including Stanford and U.C. Berkeley and Harvard. She is a member of the National Academy of Television Arts & Sciences, where she serves as a judge for the Emmy Awards. Carolina was born in Bahia, Brazil, and holds a Master’s degree in Radio and Television from San Francisco State University.

I am from Bahia, but I have been living in the United States for most of my adult life. In 1999 I went back to Bahia after being away for almost 7 years, and I started to notice a shift in how women dressed and wore their hair—the presence of braided hair on the streets was especially remarkable.

The next year I returned again to shoot a documentary about the local carnival, called Festive Land: Carnival in Bahia, and I had the opportunity to spend a couple of very special days with the group Ilê Aiyê.

Ilê Aiyê is more than a carnival group. They have year-round social projects that help thousands of people in the neighborhood, aiming to propagate black culture, raise self-esteem, and develop consciousness regarding racial discrimination issues. Ilê Aiyê's carnival parade features a young woman called the Ebony Goddess, selected for her beauty according to Afro-centric standa rds of beauty, her mastery of African-originated dances including religious Candomblé dances, and her ability to inspire others through her personal history.

Bloco Afro and Afoxé: Afro Brazilian Carvinal as a Political and Religious Stage (2003)

Lisa is the author of Entre a Oralidade e a Escrita: a Etnografia no Candomblé da Bahia, a study of the role of writing in Afro-Brazilian religion. Her interests also include popular music, and she co-produced the anthology CD, Rough Guide to the Music of Brazil: Bahia. She worked as associate producer and ethnographic consultant for Festive Land: Carnaval in Bahia and Ebony Goddess: Queen of Ilê Aiy